As a producer of organic infill for playing fields, we are constantly striving to improve player safety on all levels. Sports makes invaluable contributions to character development and the future success of children by teaching them teamwork, discipline, self-control and triumph over adversity. However, with increasing competitiveness, intensity and helmet technologies that "weaponize" the head, traumatic brain injuries (concussions) in sports have reached epidemic levels. The playing field is significant to this discussion. The Concussion Legacy Foundation has determined that at least 1 in 5 sports-related concussions are the result of a head impact with the playing field surface. Unlike a helmet, cleat or shin guard, the field is the one common "equipment" used by all athletes. The safety and performance of the playing surface will ,therefore, affect all athletes participating in field-based sports. 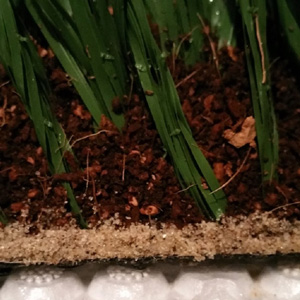 Natural Turf as a Benchmark

Turfgrass is the term used to describe engineered natural turf for playing fields. Pristine turfgrass is the benchmark for the safest, high-performance playing surface. Turfgrass is firm to run on, provides ideal traction and is resilient under bodily and head impacts. Consequently, International performance and safety specification for synthetic turf are modeled after values achieved on turfgrass. Turfgrass is not only the playing surface of choice of elite and amateur athletes alike, but as compared to traditional synthetic turf, has shown to produce exceptional results under impact tests to assess head injury risk. In order for the field owner and athletes to enjoy the optimal safety and performance of pristine turfgrass year-round, the objective for the design of an ideal synthetic turf surface must be to achieve or exceed performance and safety results of pristine turfgrass.

All synthetic surface systems were tested according to standard protocol over concrete in a temperature controlled laboratory environment. The natural turfgrass surfaces from the University of Tennessee Center for Athletic Safety (UTCAS) study consist of pristine test plots at optimal turf density and sand/soil moisture content. All surfaces were tested with the ASTM F355-E procedure typically used to test natural turf; 1 drop from increasing drop heights to plot HIC results and determine "Critical Fall Height". Critical Fall Height is defined as the point at which the impact from a drop produces a Head Injury Criterion value of 1,000. At HIC 1,000 there is a >0% risk of an AIS 5 (Critical) Head Injury. A "Critical" head injury is characterized as loss of consciousness, skull fracture, neurological damage, brain hemorrhage, with a >50% risk of a fatality. This is obviously a threshold to be avoided as a result of a head impact with a playing surface.

Additional impact tests of the surfaces were performed with the ASTM F355-A ("Gmax") method and EN14809 (Field Tester). The results of these tests also illustrate that the surface properties under impacts of the Brock/turf systems compare to natural turfgrass. The 2.5" turf system provided comparatively poor results with regard to Gmax results. The resulting data from this test comparing synthetic surfaces utilizing the Brock Gen II PowerBase systems under a 2" turf with 70% sand and 30% Greenplay organic infill. The graphs illustrate impact results of the synthetic surfacing systems in relation to a natural turfgrass study from the UTCAS. Also included in the data are the results of a typical 2.5" turf with sand/rubber infill. The green lines in the graphs represent the natural turfgrass data, blue lines are Brock systems under 2" synthetic turf with sand/Greenplay, and the red line is a 2.5" turf with 9lbs sand/rubber infill as specified by the manufacture’s "Elite" Specification.

These comparisons clearly illustrate that in terms of head injury risk assessment, the composite synthetic systems with Brock Gen II PowerBase systems and Greenplay organic infill perform similarly to pristine natural turfgrass. In some cases, the synthetic systems with artificial turf infill produced superior results as compared to specific turfgrass constructions (i.e. lower HIC values). The 2.5" turf system provided comparatively poor results with a much greater potential for a head injury as a result of an impact with the surface. 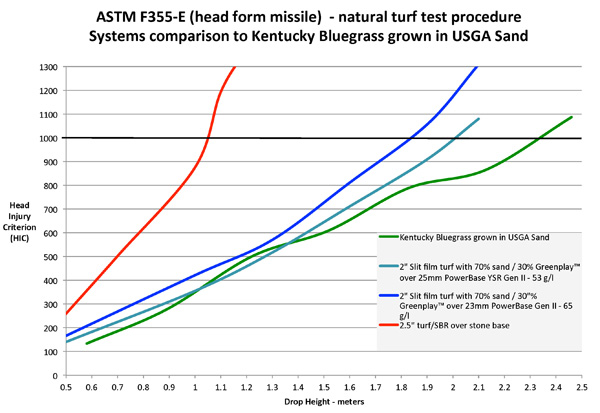 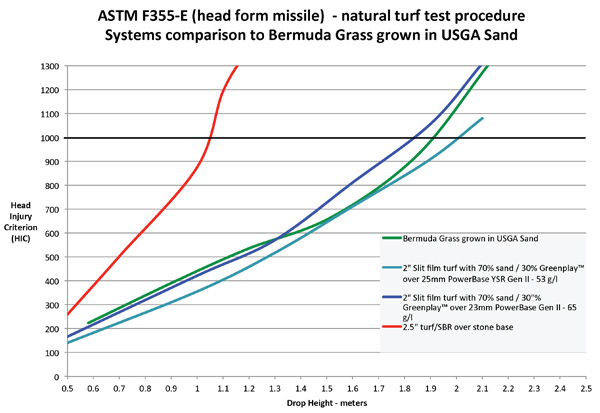 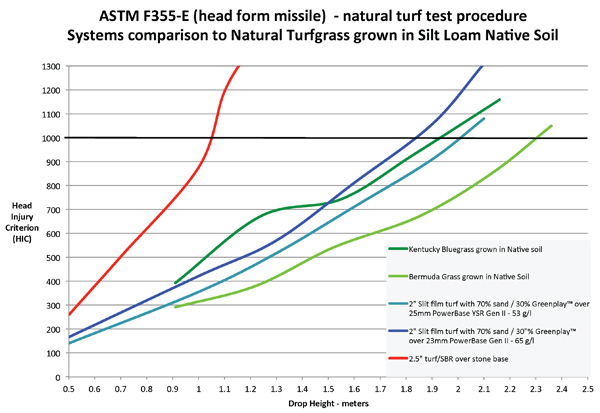 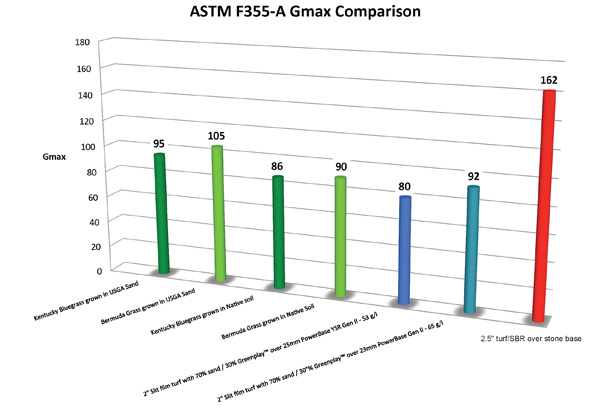 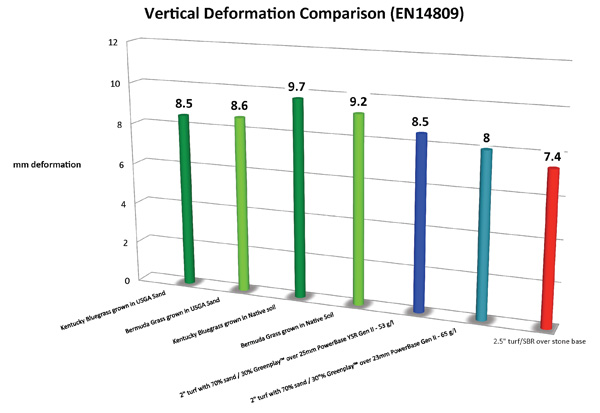